The coronavirus crisis has led to a significant decline in the number of transactions in the real estate industry. This is probably due to postponed investment and purchasing decisions as well as the limited options for meetings, viewings and notarisations. 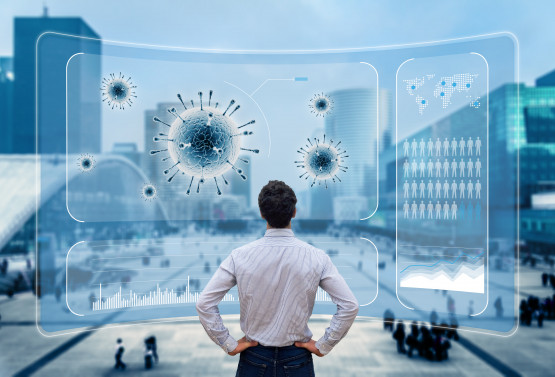 The coronavirus crisis has led to a significant decline in the number of transactions in the real estate industry. This is probably due to postponed investment and purchasing decisions as well as the limited options for meetings, viewings and notarisations.

If the crisis takes a V-shaped course and the economy recovers relatively quickly, the real estate market in both Germany and Switzerland should prove to be extraordinarily robust. Both the volume of transactions and prices could rapidly return to pre-crisis levels. The real estate market is expected to experience a major boost in the D-A-CH region thanks to the region’s internationally highly regarded crisis management. Industry insiders say that a substantial, corona-induced influx to the countries of the Alpine region, both by private individuals and companies, is very likely – which would further fuel the anticipated upturn in demand. An increasingly manifest safe-harbour mentality will ensure that security (both from the effects of the crisis itself and from secondary consequences such as totalitarian encroachments by governments under the pretence of combating a crisis) remains a key consideration for private and corporate location decisions in times of extreme uncertainty. This will chiefly benefit the real estate market, but will also have a positive impact on the labour market in Central Europe.

If the economic recovery takes a different course, these effects are likely to be merely delayed and subsequently have an even greater impact. Admittedly, we are currently seeing a certain sell-off tendency among investors who have tied up large shares of their liquidity in real estate during the property boom of the past years. However, such dynamics are normal and more likely to be a reflection of a lack of foresight on the part of investors than of any weakness in the real estate market itself. Professional investors with a suitably long-term strategy would be well advised to wait for prices to bottom out, provided such a downturn even takes place, and then to enhance their overall portfolio by making targeted new investments based on more favourable subsequent purchases.

For private buyers of houses and flats, a ‘wait-and-see’ approach is currently considered most suitable. Not only does this allow them to obtain more affordable housing than is currently possible at prime locations, but it also gives them an opportunity to better assess what the future holds for them, both in a general and a personal sense. This means that sellers have to be patient with the current lack of eager buyers, and should not be tempted to lower prices, which will only result in a negligible increase in transactions. Likewise, the prospects for the mortgage market are also a reflection of today’s lack of buying pressure. Interest rates are expected to remain at pre-crisis levels over the medium term. This is a realistic assumption in view of the massive amounts of money currently being pumped into every market.

In summary, we can say that the real estate markets are currently catching their breath, but not holding their breath. There is currently (still) no sign of nervousness or panic. Even in the worst-case scenario of an L-shaped trajectory for the ensuing economic crisis, compounded by a protracted recession, the above-mentioned points will put the real estate market at the cutting edge of the next upswing. A more extensive market shake-out will be inevitable in this case, though, especially among real estate developers, general contractors and the building industry, as this will consequently result in a significantly reduced volume of construction activity for a certain period of time, meaning that the considerable overcapacities built up in the prosperous climate of recent years will be levelled out again.

But things have not yet come to that point, and the economic stimulus packages announced by governments may allow us to steer a U-shaped course through the stormy waters that could lie ahead for the economy.